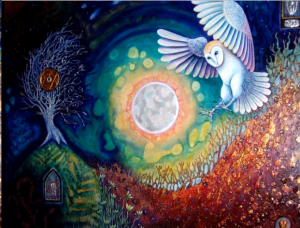 My readers vary in knowledge and belief in many things.  Solar and galactic configurations—astrology,  that is—and all the shots of energy those configurations bring and which affect us is one of the things some of you may feel skeptical about.  I encourage true skepticism, which is wariness of a new idea until you’ve learned more about it, experienced something of it, or felt an intuitive knowing.  To you, I say, never believe anything just because I say it.  Take it with a grain of salt, learn a little more, while you decide what you think.  If you are a debunker, having a preset belief without evidence either way, like many who wrongly call themselves skeptics, you probably aren’t reading this, and if you are, loosen up, suspend disbelief, become a skeptic, for that is the scientific attitude.  Use that attitude, also, about intuition, channeling and visions.  For the religious one who may be reading, know that those are the ways the information in your good books was obtained.

This attention given cosmic events is a part of life in our New Earth, just as it was in ancient times, so I will tell you about them from time to time.  I’ve taken the position that I can’t know everything and I rely on experts to tell me what is happening in the heavens and how it will affect me, society, and Mother Earth.  I’ve noticed, when I’ve paid attention, a correlation between my life and my feelings and what the astrologers and channelers say.

The energies of astrological events seem even stronger this year than last.  March had the total eclipse of the sun and several other events.  Now, we have a blood moon coming up on Saturday, April 4th, 8:07 a.m. EST, that will open another portal.  According to Anna Merkaba¹, this will bring us more Freedom by gleaning more of our “stuff” out of us.  You know what I mean.  Psychological issues.  You may have, like me, observed them coming up in you since 2012, and processed them by feeling and letting them go—letting go of the shadow side (negativity) of the ego.  This Blood Moon portal will instigate elimination of more thought habits.  That means we’ll trade old ways of thinking for new paradigms. Be prepared to discover soon that you’ve changed in many ways, in mind and body.  What kinds of ways?  Let’s start with the body.

Our bodies, having more Light in them, every molecule vibrating at a higher level, are amazingly morphing.  Our DNA is changing.  We may feel energetic or tired, sometimes hour by hour.  We are changing the kinds of food we desire.  It is all individual.  You may desire less food, as your body takes in energy from the sun and other sources around us.  I’ve made a YouTube playlist on sun gazing, for those who are interested.  People who do it report more energy and lighter diet.

If you feel a little off, remember that spending time in nature will ground your energy.  You’ll feel more calm and stable.

I expect that our individual shifts will take off this month and that we’ll all be quite different people in another year, as we magical beings, not all at once, not all at the same speed, but ALL begin reawakening to who we are and what we used to know.  I can tell you a few things you may change your thinking about.

The Universe is infinitely abundant, always and everywhere.  We only thought there was lack on Earth, and lived according to that belief.  In fact, it caused our enslavement by the  controlling Global Cabal, their Illuminati and Archons—caused them to want to enslave us and us to allow our own enslavement, out of various fears.  Now, as we learn there will always be more than enough of everything for everybody, we can stop fighting over material stuff.  Fears are blowing away.  There are whole new Multiverse paths we’d cut ourselves off from and can now begin to explore.

YOU are in control of your circumstances, according to your beliefs.  Beliefs are behind your actions and reactions.  They set your vibration, and according to your vibration, your desires come to you.  This is called Law of Attraction or more correctly, Law of Energetic Resonance.  It’s important to know how it works, that we are gods, i.e., creators.  No more blaming anyone for what goes on in our lives.  Stop and consider how knowing this principle will change each person and the huge ways it will change society.  The Cabal sure knows this.  That’s why they’ve taught us, through their brainwash schools and lying media, so many reasons why we can’t, who is holding us back, how much work it will take to be a “success”.  Well, now, the Cabal is virtually gone and the others are begging to bargain.  Now we begin to take our power.  First item is to stop the thoughts that we can’t have or do what we want.  We are going to learn how to create anything we desire!

We find that we love more.  People, animals, plants, rocks, the sky, sun, stars—all beings.  You’ve noticed animals being more loving, too.  We will learn what living and thinking through the heart means.  We find that we quickly release anger, hurt, disappointment, blame, and other negative emotions.  We take the information those feelings give, and let them go.  No more fussin’ and fightin’.  We will forgive those who played the dark side, too.  Yes, we’ll forgive those who caused all the hardships we experienced on Earth.  After all, we’ll learn that we agreed to go through the game that we have now virtually won.  We will love Mother Earth, too, as a being, respecting and caring for her.  If you’ve followed up on what I’ve told you about the new banking system, reading news from links on my website, you know that funding plans include cleaning up our environment, which is Mother Earth’s, Gaia’s, body.

We will become consciously Multidimensional, encountering beings and humans in non-physical form.  We will understand that Spirit beings are everywhere.  Life is everywhere, all over the Multiverse, in every dimension.  Be prepared for the possibility, as has already happened to a few people, of sudden opening of abilities, like healing, “seeing”,  and “knowing”.  There is something called the Akash, Akashic Records, or Akashic Library where is “written” the memories of everything that has ever happened.  From it, we can know anything we want to know about our planet’s history.  Our galactic friends will give us a head start on that topic.

Don’t feel bad if any of this sounds foreign to you now.  We’re all learning together.  Some two steps ahead of you, some a step behind.  Our development will never cease.  No worries.  You’re neither behind, nor running late.  You’re right on your own path.  After these years of Transformation, we have a thousand years of peace and joy on Earth.  No more hardship. I mention anything I think of that may feel upsetting to you.  I’m always amazed when I tell someone about New Earth and the changes, and they respond, “That’s scary.”  It’s all good!  Yes, there is still negativity.  It’s not going to disappear in a snap on April 4th.  People who have been taught hatred may have to drop body and come back in, to get over it.  Some areas of it may take three or more generations.  Be open to the changes and don’t fear ANY of it.  If there is something you fear or worry about, in this process, add a comment or send me a note.

I’m giving you two astrological videos today, about the April 4th energies, plus the link in the note, below, to Anna Merkaba’s Message to the Ground Crew. The first, from Chandra Easton, is my favorite because she includes her own visions and their interpretations.  Unfortunately, she saw Earth disruptions in the South Pacific, an area which has already been having earthquakes 7+ on the Richter scale.  You will learn that people involved in natural disasters often have volunteered to come in and lose their bodies in those disasters, to help bring in this New Earth.

I chose this one from pantherJim1995 for the opposite reason, being down to Earth and relating it very much to the individual, personally.

This, I just couldn’t help:

Notes: 1   Anna Merkaba’s message to read or listen to:  link.

This Exercise Will Cause Any Disease To Disappear Forever – Oct. 5, 2022

Editor’s Note: Wow! This truly leads to the end for using pharmaceutical products!!