Solar Events, Time and THE Event 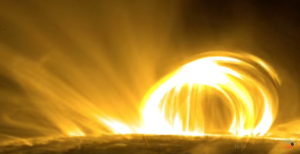 While I have time to write today and the “every other night sleep plan” (insomnia) hasn’t done me in totally, I have kids and grandkids in the path of hurricane Irma and I’ve spent writing time following the storm.  At least I can put out more on the huge solar flare, this time from Jordan Sather.  I like that he points out that the flares affect not only electronics, including those on aircraft, but also our bodies and consciousnesses.

Regarding the solar event announced yesterday by Suspicious 0bservers in my earlier post, and other events, people are still awaiting THE Event.   My understanding of The Event has changed and I’ll explain that to you.

I had first heard of The Event from the Quantum Healing Hypnosis Therapy (QHHT) sessions that I posted under category “The Event”.  You can search for it on this blog.  Ron Head’s “Subconscious” (aka Higher Self) had told about it.  In a later session he was asked about it and said that we were “in those energies” of The Event at that time.  Hmmm.  I at first felt that was a retraction, but over time I thought about the difficulties of timing in one dimension relative to another.

Time is faster in higher dimensions.  In fact, one day in a higher frequency dimension may be rather equivalent to several of our years.  That’s why it is risky for a seer or psychic to give dates when making predictions.  It is preferable to look at a condition or sequence of events that will happen before the prediction is realized.  Our time granularity is so much smaller than that of higher dimensions, that a sequence or set of events over a period of a few of our years may look like ONE big event when viewed from a higher dimension.

Since time is not such a great measure for our events when viewed by someone in a higher dimension, I understand they go by energetic frequency, instead.  Thus, Ron’s Higher Self perspective of “being in the energies of The Event”.  The Event won’t be one big event that puts us into a higher frequency.  It sure won’t put us into the fifth dimension (5D).  We’re already in 5D, though most people are unaware of it.  Some of us are in the higher fourth density (4d) and some of us are still bawling and squabbling in good ol’ third density (3d), but we’re all in 5D.

Further below is a video by Brad Johnson, channeling Adronis.  Five questions are put to Adronis.  They all relate to timely events and the answers are quite interesting.

(Note that Brad uses capital D for density.  On this blog, I use D for dimension and d for density or simply spell out density.)