The energy of “The Event” that we’ve been talking about sure is changing us.  Do you feel it?  If you’ve paid any attention to what’s happening in America, then you know the social level energies have changed, too.  Donald J. Trump has been working non-stop for America, and thus, the whole world, since his election and for several months prior to that.  He’s 70 years old and producing like a 30 year old, signing one LAWFUL executive order after another, with the aim of freeing us from control and poverty that’s been caused by Cabal who had taken over America.  The time of working our lives away and government theft of what we make, money used to harm us, is ending.  Our awakening Consciousness is the catalyst and President Trump is the executor of the Collective Will of the People.

As for the foolish, who believe the lies and march against Mr Trump, one can only feel sorry for them. They are to be pitied. They are so easily led and are not capable of seeing the truth, even when it is right in front of them. They want to remain manacled to corruption; forever slaves to the Cabal. Pray for them, that they may see the light. ~ Montague Keen

One effect of New Earth energies is more communication with those in higher realms.  The following article was channeled to his wife by the late afterlife investigator Montague Keen.  As always, don’t be fearful of channeled messages, but do use your intuitive discernment in believing them.  Any message that generates fear is not one to entertain.  The following is certainly full of optimism about our future.

Texts emphasized by me. 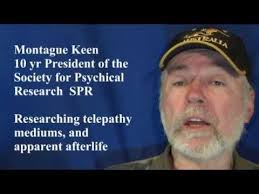 Your world has taken a significant step forward with the election of Donald Trump. All the demonstrations against him were organized by the controllers of your world who are fast losing their deadly grip on humanity. Mr Trump wisely brought in very wealthy people to assist him. The reason for this is that they cannot be bought by the Cabal, or controlled by it. They are free to make the best decisions for the people. The Cabal has a noose around the necks of the American people. This makes your lives a struggle. Those within the Cabal are not your friends, so why do you always fall for their lies? You have not fully ‘lived’ in America for years. You have merely survived. You have watched your young men become cannon fodder for the Cabal, year after year; and today, they are still being slaughtered. For what ?

Please take a moment to think about the constant WAR which is waged by America, and ask yourself, WHY ? What has driven America to kill so many innocent people? Remember the ‘weapons of mass destruction’ that never existed. Career politicians answer to their parties; they are totally controlled. I have suggested many times that political parties must be dismantled, as they enslave you. You needed a Mr Trump, with a good business head on him, to look with eyes free of control, at how he can improve the lives of the American people. HE DOES NOT WANT TO KILL ANYONE. THE SATANIC LUST FOR KILLING MUST BE STOPPED.

Major steps forward lead the way to the whole human race being able to enjoy life as they are entitled to. The SATANIC CULT that took over politics, organised religion and humanity as a whole, has had a severe shock; one that they were not expecting. Humanity is waking up and seeing clearly how it is controlled. People have decided to REFUSE TO BE THE INSTRUMENTS OF THEIR OWN DEMISE.

Brexit was the first shock. The British Government is now trying to find a way to reverse it, but the good people of England will not allow them to sidestep it. Mr Trump was the second big step forward. You are on a winning roll. Who has the courage to be the third to say NO to the Cabal ?

All it takes is for people to stand together and make the changes required to remove the control of your oppressors. Demand that the Cabal removes the chemtrails that destroy your lungs and cause so much suffering. Remove the dangerous chemicals from your water and your food. All these things are done to cause you the maximum suffering. The vaccinations that Henry Kissinger and Bill Gates boast about on YouTube are being used to CULL THE POPULATION. Wake up. Do you really want to assist the Cabal in killing you ! Remember, by doing nothing, you are giving them permission to kill you.

Politics is a dangerous game. Do not become its victim. You cannot change your world using the same politicians who destroyed it. It is time for a complete rethink about how life on earth should be structured. No more war, and justice must be restored. The Cabal must answer for its crimes and restitution must be made. The Vatican should lead the way by returning to humanity all that it has plundered and hidden from you. They do not own what is stored at the Vatican. It belongs to the people. Its crimes against mankind began nearly 2000 years ago. All that the Vatican stands for is TOTAL LIES that ensure control. There is not one shred of evidence for what they claim to be true. It is a fairy tale concocted at the Council of Nicea that the peasants rashly accepted. It was this that caused the downfall of humanity. The Vatican created the idea of hell in order to create fear in you. I assure you that there are no such places as hell, purgatory, or limbo. What loving god would create such places ?

Suffering is SATANIC. The satanists need the pain of your suffering as it enables them to survive. It is as simple as that. The Vatican does not serve the God of Love. Listen to them sing to Lucifer. It is all there, out in the open, but you are so controlled that you believe all they tell you. Look at their actions, not their words.

The long-awaited awakening is happening.

It is good to be able to observe it. You can feel the energy change from the dark evil ways of the Cabal to the sunshine of truth and justice. Now, when you look at your TVs, you clearly see the lies and wonder how these people can live with themselves, as they spread the lies of the Cabal. The journalists continue to lie in the hope that some will believe them. As for the foolish, who believe the lies and march against Mr Trump, one can only feel sorry for them. They are to be pitied. They are so easily led and are not capable of seeing the truth, even when it is right in front of them. They want to remain manacled to corruption; forever slaves to the Cabal. Pray for them, that they may see the light.

Pray also for all those who are unjustly imprisoned by the Cabal in jails, without charge, especially in America. This is done to prevent these individuals from exposing the truth. Good energy should be sent to them. They are on Earth to serve humanity, but the Cabal has sought them out and locked them up. Let us hope that Mr Trump will look at their cases when he has dealt with the bigger issues that face America. Send him your support and good wishes, to give him the strength to change all that needs to be changed for America and the rest of the world.

My dear, you made great strides forward this week. Doors opened and you made progress.