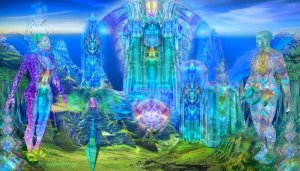 I’ve spent too much time today reading reports from Cobra and other websites, thinking about ways our liberation could go down and wondering why it is taking so long.  I still feel that a significant rise in our Collective Consciousness, and a heavenly energetic event will be required.  It seems that this week’s message from the Galactic Federation via Sheldan Nidle is saying just that, and that it is about to be evident.

[First part is from the Galactic Federation.  The second part is from higher beings, the Ascended Masters. ~rp]

Selamat Jalwa! (Be in Everlasting Joy!) An operation which is to give you a new world is now finishing. For millennia your surface reality has been limited in its perceptions by core lies and unbelievable deceptions. You are at least at the very edge of a different reality, in which you are surrounded by truth and new governance dedicated to your well-being. This is something that you are not used to. Rather, you expect to be lied to, cheated or just plain deceived. Over the past few weeks, a new realm has been constructed. This world is more than a gift for this holiday season; it is to be a realm in which you can rejoice. This new realm is there, but not yet manifested. You are presently seeing it manifested before you. The dark is defeated, but not yet isolated from you. A final set of events needs to occur before this most wished for event occurs. This reality is being slowly transitioned and when this is completed, some very clear signs are to appear before you. Until then, be both knowing and confident of this great change in your reality.

Long ago, Heaven decreed that this moment in your history was to happen…[continue reading]

This procedure is reaching a point where the first of many events that you have long waited for can happen. This process has had its pace quickened, as each of you has begun to think collectively. This joint effort is about to be rewarded.

You may wonder what they mean by thinking collectively.  It’s not that we get together and make joint decisions.  Certainly, no one is leading us.  Rather, we have begun to think similarly.  We who are awakened to the lies, control and games being played on Earth have similar desires and goals.  We are tired of the Controllers.  We want it to end.  Most of us don’t watch the controlled false news.  We desire abundance, good air and water, fresh, healthy food, and health.  We are ready to cooperate and build together, as opposed to competing with each other.  We want to be left in Peace and to leave everyone else alone to live happy lives.  We feel our spirituality and choose to express it freely in our own way.  We love more.  Wouldn’t you say that is all true?

Thinking collectively is uniting us.  It gives cohesion and therefore, harmony, to our Collective Consciousness—the totality of all our thinking, as a whole consciousness, a collective force.  What we have had, increasingly, until now, is a disharmonious collective consciousness.  Our concepts, beliefs, concerns, and goals were at wide variance.

Because there is more strength in harmony than disharmony, the harmony among about one-third or more of the people on Earth now outweighs the disharmony among the rest.  We now have a strong, relatively harmonious collective consciousness that is rapidly becoming more so.  That is why it has been “seen” and announced by the trinary Collective Consciousness of planet Essessani that by the fall of 2016, before our presidential election, “Everything will change!!!”