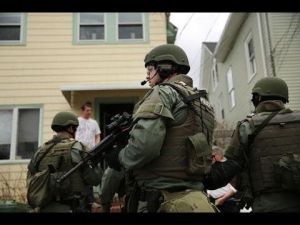 So ugly: Florida officer tases 62-year-old woman in the back just for the hell of it

This brief story with a video is an example of why I say to start acting as a free person, a powerful child of the Creator, in YOUR local neighborhood.  Here’s an incident where one person had the guts and brains to question the police.  The rabid, mouth foaming dogs, as is typical these days, tasered her for no reason.  It seems she was not backed up by her neighbors.

The Police Work for You

Take Control of Them

It’s important that you know this:

Why Is Homeland Security Taking Control of Local Police?

Watch your neighborhood instead of the TV.

Your quiet hatred, standing on the porch video taping (for which I thank these dear people) does nothing but please the dogs and their masters, the Illuminati.  We’ve been brainwashed to forget our local responsibility and our POWER.

I don’t think police will even act this way if you make the effort to know your local police force members, but be prepared for the possibility of such an event.  You need to all be armed and ready to state the Constitution and local laws that guard your inherent rights, knowing that no government entity gives anyone any rights.  Form a local neighborhood unit, so you all know each other.  Know the city council members and the police chief, and monitor their performance.  Always let it be known that they work for you.  Always have and present that attitude.

Choose the persons in your community with the most powerful persona who, like the farmer who can walk up to a mad bull and quiet him, is able to walk out and with quiet authority, ask why the police are there.  The police will need to know that other community members are not brainwashed.  Let it be known by your obvious interest and monitoring, that it is your neighborhood and you control it.  Always bring suit against any individual servant who acts unlawfully in any way, and that include local and state lawmakers.

WHEN this attitude is taken by all people, by every neighborhood, there will be no more wrongful police actions by local or state police.

Since we’re in the New Earth, it’s very important to watch our vibrations.  Don’t wrap yourself in fear and anger, but with personal inner power.  Feel your connection to Light (God) at all times and focus on the future you’ve chosen.  As an awakened one, create that future!