The multiverse is a magical place.  We must be open to this fact in order to act properly in the fifth dimension.  It is magical to us because we’ve been taught to think of it in three dimensions of hard physicality, with the added dimension of time.  When mentally confined in that way, our personal universe produces anomalies.  Life simply doesn’t fit into that box.  Almost always our wonderful rational minds cancel out the magic.  We only notice if a man of knowledge points it out, or something occurs that is so traumatic as to “stop the world”.

“The world” is that description of our universe that is taught to us from the time we are born—that explains away auras, imaginary friends, deja vu, past life knowledge, seeing and knowing many kinds of information that our matrix society wants us to think are not possible.  For example, my father, who decided not to get a college degree, had the ability to know chemical facts without knowing how he knew, and to do arithmetic calculations in his head that very few people can do.  I believe I had that same ability, because I catch myself sometimes continuing a calculation while becoming aware that I already know the answer.  My compulsive mind is saying, “Wait.  Don’t bother me now with that answer.  I’m busy figuring out the answer!”  You see the magic is there, but I ignore it.

The magic is there for all of us.  A trauma may knock mental and physical limitations out of us forever or for a brief time.  A man may experience “super human” strength, as he attempts to save himself or another from danger.  I was a small child.  I’m only 5’0″ now.  Once, standing beside a picket fence taller than I was, with a mad bull running toward me, I jumped that fence, no problem.  A large storm can stop the world.  It may cause an interruption in electricity, telephone access and transportation.  With little movement and no TV, internet or radio, life becomes peaceful.  We get outside, party and share with the neighbors.  Without distractions, the peace allowed the body and mind, plus the increased sharing of love, allows access to our higher levels of mind.  We feel strange.  Our thinking is thrown off.  We are then in a position to notice anomalies that the distractions prevent us from knowing.

The universe gives us personal signs, warnings and messages that we have been taught to disregard.  Knowing this, looking for and participating in conversations with the universe is considered in our crazy matrix society to be somewhere in the categories of whimsical, eccentric, idiotic, and insane.  We, though, are on a different path now.  We’ve taken the red pill.  We know we are, or think we may be, in 5D and are open to exploration of new possibilities.  We are willing to try new ways of thinking, so let’s start being more awake to possibilities of conversation with our universes.

What do I mean by messages and conversation?    Here’s a little teaching of Carlos Castaneda’s Don Juan.  JOURNEY TO IXTLAN — THE LESSONS OF DON JUAN, Chapter 1: REAFFIRMATIONS FROM THE WORLD AROUND US.  These events happen soon after Carlos has met Don Juan. Carlos thinks he is getting Don Juan to teach him about plants.  Don Juan, we know, is tricking Carlos into being an apprentice, because spirit has pointed him out by a small whirlwind of dust, during their first meeting.

We hiked in the surrounding desert until it was almost dark. He did not show me any plants nor did he talk about them at all. We stopped for a moment to rest by some large bushes.

“Plants are very peculiar things,” he said without looking at me. “They are alive and they feel.”

At the very moment he made that statement a strong gust of wind shook the desert chaparral around us. The bushes made a rattling noise.

“Do you hear that?” he asked me, putting his right hand to his ear as if he were aiding his hearing. “The leaves and the wind are agreeing with me.”

I laughed. The friend who had put us in contact had already told me to watch out, because the old man was very eccentric. I thought the “agreement with the leaves” was one of his eccentricities.

We walked for a while longer but he still did not show me any plants, nor did he pick any of them. He simply breezed through the bushes touching them gently. Then he came to a halt and sat down on a rock and told me to rest and look around.

I insisted on talking. Once more I let him know that I wanted very much to learn about plants, especially peyote. I pleaded with him to become my informant in exchange for some sort of monetary reward.

He repeated the statement three times and then the whole area was shaken by the roar of an Air Force jet flying low.

“There! The world has just agreed with me,” he said, putting his left hand to his ear.

I found him very amusing. His laughter was contagious.

I wanted to buy him some beer in the restaurant. He said that he never drank, not even beer. I laughed to myself. I did not believe him; the friend who had put us in contact had told me that “the old man was plastered out of his mind most of the time.” I really did not mind if he was lying to me about not drinking. I liked him; there was something very soothing about his person.

I must have had a look of doubt on my face, for he then went on to explain that he used to drink in his youth, but that one day he simply dropped it.

“People hardly ever realize that we can cut anything from our lives, any time, just like that.” He snapped his fingers.

“Do you think that one can stop smoking or drinking that easily?” I asked.

“Sure!” he said with great conviction. “Smoking and drinking are nothing. Nothing at all if we want to drop them.”

At that very moment the water that was boiling in the coffee percolator made a loud perking sound.

“Hear that!” don Juan exclaimed with a shine in his eyes. “The boiling water agrees with me.”

Then he added after a pause, “A man can get agreements from everything around him.”

At that crucial instant the coffee percolator made a truly obscene gurgling sound.

He looked at the percolator and softly said, “Thank you,” nodded his head, and then broke into a roaring laughter.

I was taken aback. His laughter was a bit too loud, but I was genuinely amused by it all.

How could it be possible that things around you know what you’re thinking and want to and do converse with you?  In the first place, it’s your own personal universe, created by you and every decision you’ve made and every desire you’ve sustained.  It’s yours.  And any being in your universe is your version of part of its own universe.  Every being is sentient in some ways, and can communicate.  If it’s benevolent to you, it will help you.

Sometimes your universe of beings gets the message out through inanimate objects.  You may be driving along with your friend, and you both see a truck go by with a picture on the side, of a tropical beach.  Your friend takes no notice of it, while you, who have been wondering whether you should move to the mountains or to the oceanside, not only take notice, but consider it to be a sign that the ocean is the best place for you to be.  In come cases, you may wait for a couple more signs before being sure, or you may be practiced at conversations with your universe, and take that truck as a definite voice of the universe to you. 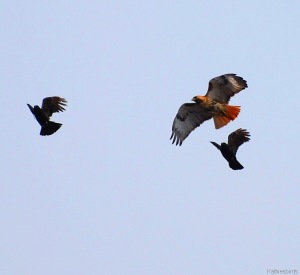 Many of my friends look for animal totems.  In the body of totem knowledge, it is commonly held that hawks are messengers and crows provide insight.  A friend of mine shared with me yesterday a few minor business disappointments she’s had, of late, including someone else getting a sale that she thought she’d get.  While we were talking she saw a large hawk with food in its mouth, surrounded by a group of crows trying to grab that food.  She told me about having seen just the other day, a hawk sitting on a fence and a group of jays pestering it.  She figured it was near their nests.  I told her about the totem meanings of hawks and crows.  I told her that it’s really her place to discern whether or what the message was to her, but I said that what I feel it meant is this:  She is powerful in her business, powerful like a hawk.  Others have noticed her and are feeling competitive against her.  They want to knock her off her game.  The food in the hawk’s mouth is the sale she expected.  In her business, one of the crows took her food.  The two scenes were created where she would see, to tell her that rivals are after her, so she needs to be on her game.  Not to worry, though, because she’s the powerful one.  She needs to trust that power while being aware of competitors who would rather take her business than find their own.

Now, let’s make it a habit to each expand our personal universe by being aware of signposts appearing along our pebble paths.  Let’s go a step further and ask for a sign.  See what happens.