We Are IN “The Event”

Today, I revisit the topic of “The Event”.  That is the event that will let everyone know that something tremendous is happening.  My readers will know that it is about knowing we are in the New Earth.  It is about bringing the I AM consciousness into ourselves, acting as that Higher Self that we are.

Before reading this, it would be good if you read my previous two posts under category “The Event”, and watch the first three videos by Suzanne Spooner and Ron Head (Speaking with Self) that I included in the first post in the “The Event” category.

Over the past few years, I, and some of you have experienced many changes and felt strangeness, in reaction to the changing energies involved in the Transformation to New Earth.  Around the date that Event video #4 was recorded (listen below), March 18-20 of this year, I began to feel even more strange.  I knew something had changed in the energies of the planet.  Some information that I hook into relates to the energies that affect us at equinoxes and solstices, etc.  I haven’t studied that in depth, so I keep an eye on what others say, not being particularly mindful of predicted effects, but using it to help garner a general feel of how things are changing.  I went back and read that people had thought the Vernal Equinox on March 20 was an opening in which the Event could take place.  Then Suzanne and Ron came out with this fourth video, saying that we are already in the energies of the Event.

I thought, “Now, wait a minute.  We were talking about an event that no one could deny.”  I asked one of my “regular person” friends, “Do you detect any event that tells you something BIG has happened?”  She said no.  I didn’t want to blog on it until I got comfortable with what I was feeling and thinking.  I’m not simply a relater of what others say.

Shaman Gregory had called together a one day seminar to tell us about the current state of the New Earth and how our spiritual practices should change, in adjustment.  I missed it, due to the QHHT Level 2 class.  I went up to Arkansas for several days, for the class, returning to my full force insomnia/narcolepsy problems, while adjusting to developing understandings about my own Higher Self, and still feeling those energies.

Now I’ve sorted out that yes, we are in the energies that are bringing in the “I AM” presence, the Consciousness that at root, we are.  I call that the Higher Self or Subconscious (SC), with a capital S.  Not the psychologist’s subconscious. That highest part of ourselves, that “individual drop”, perhaps fractal, of Consciousness that on some level may not be differentiated from The ALL, is descending into us, working into our everyday consciousness. 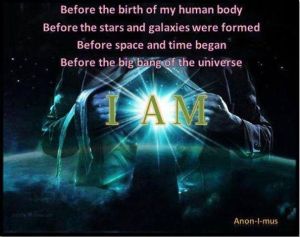 That is what I’ve begun to see evidence of in myself.  Some (sane) people hear voices or have visions, but I usually don’t.  I’ve heard a few cases of people saying lately that God has begun to talk to them.  I only have thoughts, so it’s hard to know for sure.  The SC has been on my mind, since we work with the client’s SC in QHHT.  I’ve gotten information that seemed to have come from my SC, and later had it confirmed by discovering that other people had told the same information from the SC during QHHT sessions.

For now, let’s forget about having a clear understanding of SC and unfamiliar processes.

What will be the results of this “I AM” presence?

It boils down to remembering who we are.  We are powerful Creators.  It means we have the Power and Freedom to create the lives we want.

Most, if not all, of my readers have already formed a habit of turning away from negative people and situations.  Sometimes it feels like we are being shaken all over, inside and out, if we watch the global Cabal controlled negative “news” on TV.  A lot of us have thrown the TV out.  We don’t want that in our lives.  Many of us have observed, over recent years, upsetting issues and memories arise to the surface of our minds, and we’ve looked at them and let them go.

We now control our attitudes.  We are practicing the little act of suddenly shaking ourselves out of negative thoughts and feelings.  I find that I look up, see and sense my surroundings clearly.  My posture improves.  I’ve made the choice of happiness over worry, fear or anger.  Because happiness is a choice.

Much of this was happening to us before the March Equinox.  Now, expect to discover more rapid changes in yourselves, as we continue in these energies.

We will soon understand our ability to shift to where we want to be in the multiverse.  THAT is Freedom.

It’s still not the big Event that no one on Earth will be able to deny, but we are working toward that!

Congratulations You are attaining mastery in Love and Sovereignty, as a Warrior of YHWH. Your Warrior Embodiment carries the Starseed templates of the Lion of Judah, the Scorpion, the Queen Bee and Bride of Christ. You have reached ascension in grounding and birthing these templates of Divine Counterparts into humanity. Well done Beloveds  This is leading us […]