Tulsi Gabbard to Represent Earth in the Galactic Federation of Worlds? 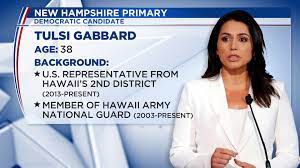 Per Michelle Fielding, Tulsi Gabbard has been working with the Earth Alliance (under its current leader, Donald J. Trump). And Ilena Danaan gave a report of being a guest on a ship which held a device that allowed her to look 20 years into the future.  Among other interesting probabilities, she saw a meeting of the Galactic Federation of Worlds with a black haired woman sitting in as representative of the Earth Alliance.  I discern that woman to be Tulsi Gabbard.  Do you?

On another note, both Michelle and Elena show drawings of Earth cities looking super space age.  It’s such a turnoff to me and, I think, to anyone who loves the beauty of nature, of Mother Earth, or Gaia, of which we are a part.  But though they depict such unnatural planned cities, listen to their words and you’ll realize that the cities they “saw” aren’t so very different from what we have now, but plants and animals become a part of them.  Michelle describes no more commuting; no more living and working in crowded cities.  City streets become gardens for people and animals.  Elena notes that cities are not so different, and have space for nature.  That’s in agreement with each other and with how I envision our future. We have no need to feel the future of this glorious blue and green jewel of a planet, the crown of our galaxy, Nakaru, will be anything but that “Jewel in the Crown”.