With an Introduction to Cobra, and an Interview Providing an Overview of this Transformation

I’m sharing Cobra’s heartening message of how the planetary astrology presents the opportunity for changes from now through next March, for big improvements of our global situation.  Now, Cobra is somewhat controversial, because he never shows his face and always distorts his voice.  My intuition says he is a good source.  He is one of the people to which I’ve alluded, who is working behind the scenes to free us on this planet.

If you like, I’ve included audio of a good interview of Cobra by Sandra Shufflebottom, at the end of this post.  For those who have not kept up with many of the subjects relevant to our Earth situation, if you can put up with Cobra’s voice distortion, you’ll gain an overview.  The multidimensional players are told.  Many quick questions and answers, including the fake Ebola crisis, and even the fact that the oil talks to itself.  He speaks of The Event as the arrest of the Cabal members.

In today’s article, Cobra mentions the Chimera group.  He has explained in the interview that the Archons are the beings, mostly on a non-physical plane, who have controlled this planet for 25,000 years.  The Chimera is the group at the top of the Archons.  They use technologies to block us from the Light and prevent our contact with extraterrestrials.

This message is a little esoteric, so I’ve emphasized the gist in orange, for the Cliff Notes version.  Don’t discount astrology until you’ve seen enough to judge for yourself whether it is useful.

To help us further understand the significance of the Uranus square Pluto configuration, I’ve included two videos.  David Canmegh goes into, not only the astrology, but the actions of the global perpetrators of evil.  This is an extremely import time for bringing Freedom to all beings on Earth.

The video by Armand Diaz is a general description of what the Uranus square Pluto energies bring.  It was posted almost three years ago.  It’s funny that he mentions Republicans and Democrats.  By now, most of us realize that the world situation is way beyond that, as he does suggest.

A new Window of Opportunity is about to open on the surface of this planet soon.

This Window of Opportunity is our greatest chance until now to make the final breakthrough into liberation. Although the battle is still far from over, the Chimera group is losing its power with the fastest rate in recorded history and the Light at the end of the tunnel can clearly be seen. 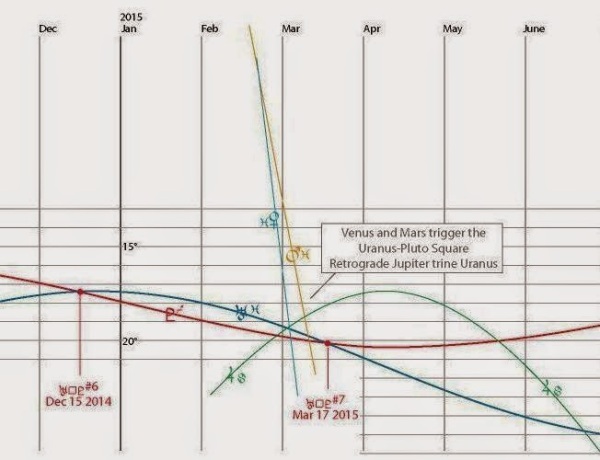 The Window of Opportunity will open with the IS:IS Portal activation part II, which will occur on December 15th this year. On that day, we will continue the work that was started with the first part of the IS:IS Portal activation about 6 months ago. We will be anchoring Goddess energies (energies of pure feminine principle) into the planetary energy grid with the purpose of balancing and harmonizing the planetary situation and easing our transition into the Event. We will be having our main activation on the Giza plateau in Egypt. You are more than welcome to join us:

The turning point of this Window of opportunity will be on January 21st next year with a special activation codenamed RR6, which is important for the Resistance Movement and not so much for the surface population.

The closing point of the Window of Opportunity will be with the last exact Uranus-Pluto square on March 17th. After this completion of the Uranus-Pluto square configuration, which was ongoing for almost 3 years, things on this planet are expected to be much less volatile.

More intel about each of the points within the Window of Opportunity will be released when the time is right.

Use The Pluto Uranus Window Of Opportunity

The Uranus Pluto square is really playing out right now – you can see the clues all around you – so, it’s time to make your m ove.
My websites:
http://www.davidcammegh.com/
http://www.endagenda21.com/

Link to Interview with Cobra