Time Travel in the Multiverse

Continuing thoughts on our pebble paths through the multiverse, let’s look at an example path.  It seems easy enough to decide to stay home one day, instead of your usual path of going to work.  You split off, creating a new you in a different universe.  But the next day, you resume your habit of working.  Those two paths, those two universes, those two timelines, have rejoined.  The little detour will likely be forgotten and fizzle away.  Now, if you decide never to go back, you will continue in your new universe.  Your consciousness would leave behind that version of you who had stayed on the job.  You would be a different you with a new future and a new, different past.  Sure, a different past, because of that little step you made in ditching that job.  Makes sense, right?

Now let’s look at a much bigger change.  I read a book long ago, Time and Again,

by Jack Finney.  In this novel, the protagonist, Si (short for Simon), during the 1970s, agrees to undergo a government time travel experiment.  He agrees to go to 1882 New York, New York.  He takes residence in a New York City apartment building, built before the 1880s.  His apartment is set up to replicate the target period in every detail.  Period correct food is delivered to his door, so that he never has reason to leave the apartment.  Appropriate books and periodicals are in the apartment and every day, the newspapers with the period date are delivered.  He is steeped in the time and place.  Not remembering all the details, I do recall his excitement one morning in hearing sounds of horse-drawn carriages, and how he flung open the window to see that he really was in 1882 New York City!  And he was able to venture outside and interact with the agreed upon reality of that time and place.

I recommend that you read that book as an avenue to start thinking about time travel, and just for the pure fun of it.

Let’s look at what happened to Si. He took a big leap from the pebble path that he’d been following in the 1970s, over and back to a pebble path ninety years gone, living in quite a different way.  Remember how we said that we can make such a seemingly giant leap, because all is consciousness, and we only need to change our consciousness to make the leap.  Si put himself in a situation where his imagination didn’t have to work too hard to use all his senses in imaging living in 1882.  Everything in the apartment helped him to think like a man of the period in New York City, so that eventually his whole body and mind resonated in the energetic frequency of living then and there, in that apartment, being a man of the time and place. 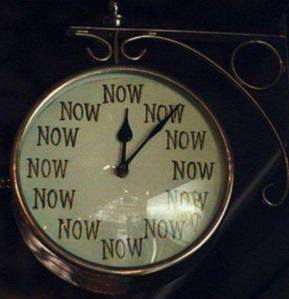 And that’s how, I am told, we can tune our consciousness to a new universe—”when” and “where” we choose.  I use quotes to remind us that nothing is happening, but rather all exists in the eternal NOW.  We can create the life we choose by resonating with, or tuning ourselves to, the life we desire to be living.  Put in another way, if we can imagine it in detail, we can live it; or on the other side of the coin, if we can’t fathom it, we cannot live it.

In later posts we will think about ways to help ourselves tune in and make the leap to the life we choose.  Meanwhile, you might want to get started on Conscious Creation by clicking on ” YouTube” on the Menu of this site, and start listening to the top row of “Creating” playlists on the home page of my YouTube channel.  Readers who have been listening to them for awhile are beginning to see GOOD changes in their lives.

We are all together in learning this new approach to life, the approach we will take from now on, in the fifth dimension!

And now, here’s a man who decided to quit his dreary job.  He’s a pretty good role model.

A Tsunami Of Bankruptcy Is Coming From The East – Former Fitch Analyst Confirms That Evergrande Bankruptcy Is Evident – No Proof The Company Made Its Interest Payment As Advertised -October 28, 2021

By Stan Szymanski Yesterday, I wrote a piece titled ‘Whistling Past The Graveyard-Investors Cheer The Interest Payment Made By Evergrande at the 11th hour-The Veiled Risks And Deception Of The Orients’ Real Estate Developers’ because of my concern about the Evergrande situation turning into a global event. I name today’s article, ‘A Tsunami Of Bankruptcy […]